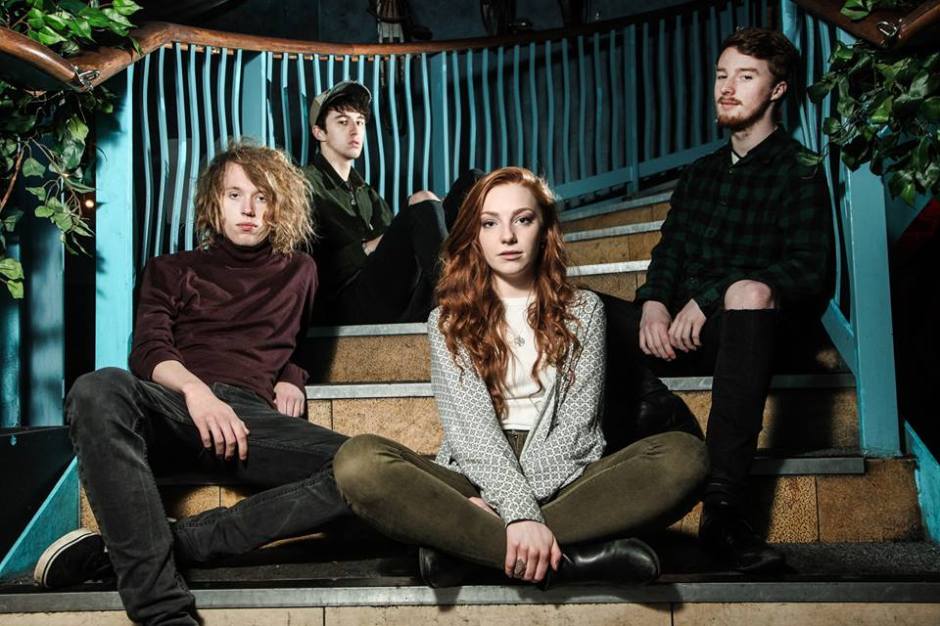 Tonight’s gig, hosted and promoted by The Boileroom and fello blog pals thnksfrthrvw was all about showcasing female-fronted bands from a variety of musical influences and genres. With a great selection of talent, a supportive crowd and good vibes all round, tonight’s gig did exactly what it set out to do.

HYLA are a self-proclaimed aggro-grunge quartet who have been “smashing shit up on stage since 2015” and they are not wrong. Seconds after sneaking onto the stage, the almost silent Boileroom exploded as Libby plummeted the bass drum, with Aaron (lead guitar) and Yani (bass) accompanying with heavy grunge riffs. And then lead vocalist Vicky Holburt began to sing, everything changed. It seems this band have mastered hardcore grunge in its basic, and sometimes predictable form from day 1, and have gone onto bring something entirely new to the table in the form of impassioned lyrics and vocals. Vicky’s voice is a perfect powerhouse of darkness. She lures you in with soft but cut-throat tales of betrayal and heartbreak being glided along by Aaron’s detailed riffs before reaching whole new heights of zealous screams surrounded by energetic drum beats and resounding basslines.

Not only do this female-fronted band play with such synergy that it is surprising they have only being going for a year, but they perform on stage as if they are playing to the sell-out crowd they deserve. As the set got more daring track-by-track, the crowd’s reaction became increasingly positive. The group (with the encouragement of guitarist Aaron) tried a hardcore rap tune that went down an absolute treat. It was the perfect demonstration of how versatile the group’s talents are, but also how stunning Vicky’s voice is, no matter what you put it to.

Also check out their live talents below:

Canterbury group, The Machiavellis are another example of how much a band can progress and impress within less than a year since. The group sauntered onto the Boileroom stage and gladly showcased their distinct musicianship with a bit of instrumental jamming to warm them up before embarking on their set. The Machiavellis’ sound is led by the almost-overwhelming talents of lead guitarist, Ruben, who throughout the set continued to embrace his daring creativity and showmanship. This is an alternative-rock/grunge band that excel in instrumental abilities as well as the knack of writing 90s hooks.

This female-fronted group are intriguing to say the least, with a clear amalgamation of musical influences including the likes of Peal Jam and Patti Smith, it is the sense of adventure and experimentation that flows through their hits that makes the band one to remember. Front-woman Megg shows off a delicate, yet impassioned voice that tell relatable tales of young love and angst, this is emphasised even more in selected tracks by the use of a duel-tone pedal which separates her voice into two distinct spheres intertwining beautifully together.

This is a band worth seeing live, even if only to see how their sound is broken down into individual inputs of the members. Up-beat drums carry the melancholic tracks, while lead guitar stammers through with intricate solos. Meanwhile, rhythm guitar and bass dictate the tone of each song, from 90s grunge to more recent indie-rock. A collection of musicians have come together to form The Machiavellis who are only going to get better and better.

Headliners – Sophie and The Giants

This is a band that are so comfortable in their own skin and with each other that half of them played tonight’s gig barefoot, while the other half were sauntering around the stage as if they were casually jamming together at home. Te first noticeable aspect of this band, (similarly to the support bands) is how can such an impassioned, ardent voice boom out of something so petit? This local group are amply named, as front-woman, Sophie did in fact seem to be surrounded by giants in regards to the size comparisons on stage, but this is more then compensated for with her huge, Florence-esk soulful vocals.

This indie-rock quartet have mastered their distinct sound, with each member playing their part to create a tightly polished collection of future hits. Set highlights included ‘Raspberry‘ and ‘All Along Nothing‘, we even got the delight of hearing a live rendition of their latest single, Lord Knows‘ (out now) which was met with positive acclaim from the growing crowd. As the set continued, the band grew more confident and energetic; part-way through, 3/4 of the band actually exited the stage, leaving us alone with Sophie’s voice to bounce off the walls. This solo track is beautifully written, with sinister lyrics “We are all human here, does that make us twisted?” that demonstrated her independent power is only emphasised by the accompaniment of screeching guitar-riffs and powerful drum beats. As their live experience develops, this band are only going to go on the up – a perfect female-fronted indie rock gem.

One thought on “LIVE REVIEW – Sophie & The Giants, Machiavellis and HYLA at The Boileroom.”